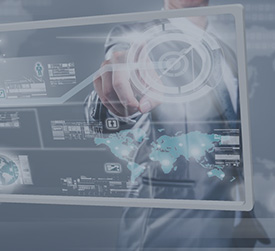 Read on to discover what our robot, Athena, has found on the future of work and act accordingly for you, your family and organization in the years ahead. Or, click any link to read the evidence she found in 9,961 forecasts she gleaned from reports, articles and PowerPoints from the Web and Social Media in a few seconds.

If you are new to foresight, we recommend you view this slide presentation first to get the best out of this report.

Analysis
For more detailed explanation of the graphics below please click here. All outlooks based on 2025 unless otherwise stated. 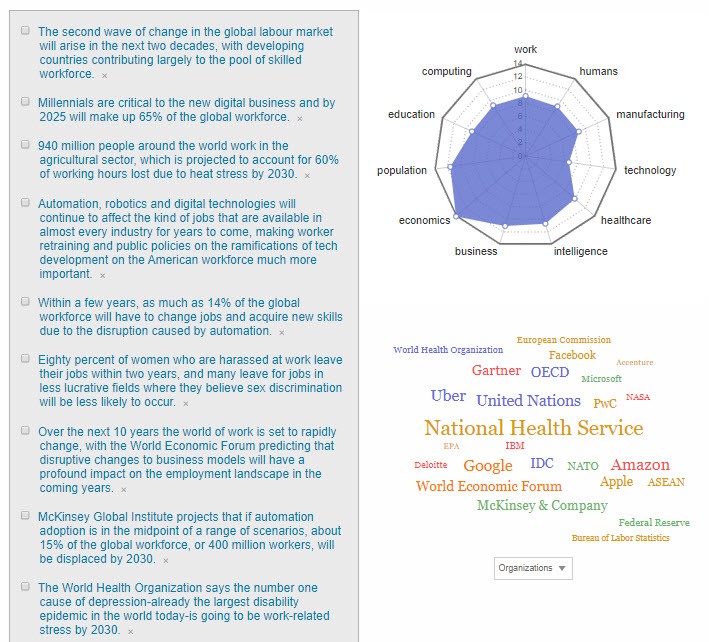 Economics is driving changes in work practices and productivity pushed forward by growing use of artificial intelligence, demographic changes and business model changes. Disruptive automation is the number one cause of this dramatic shift especially since technology engaged and enabled Millennials, will be the majority in the global workforce very soon. 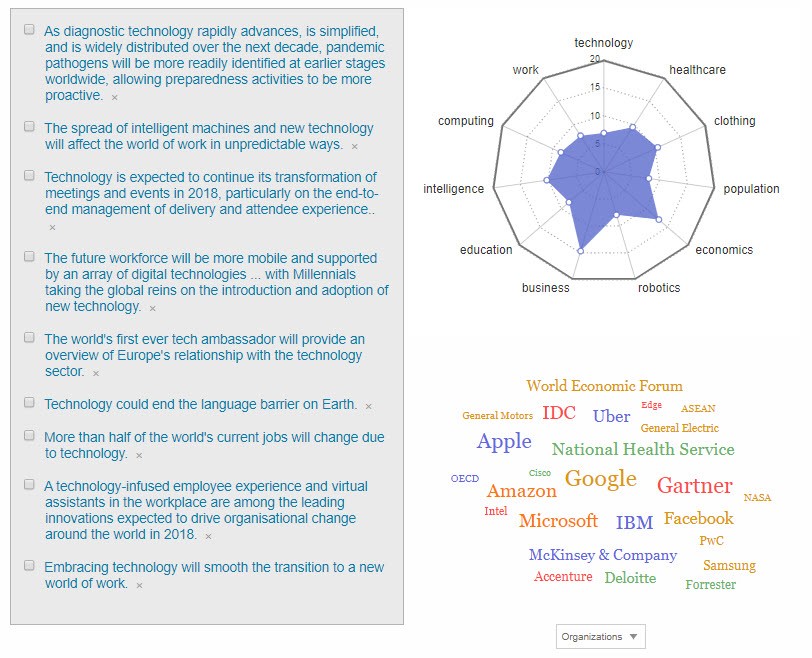 Causes
But, workplace stress, fear of losing one’s job and not being able to change quickly, enough to remain in the workforce are appearing frequently as concerns in recent surveys. 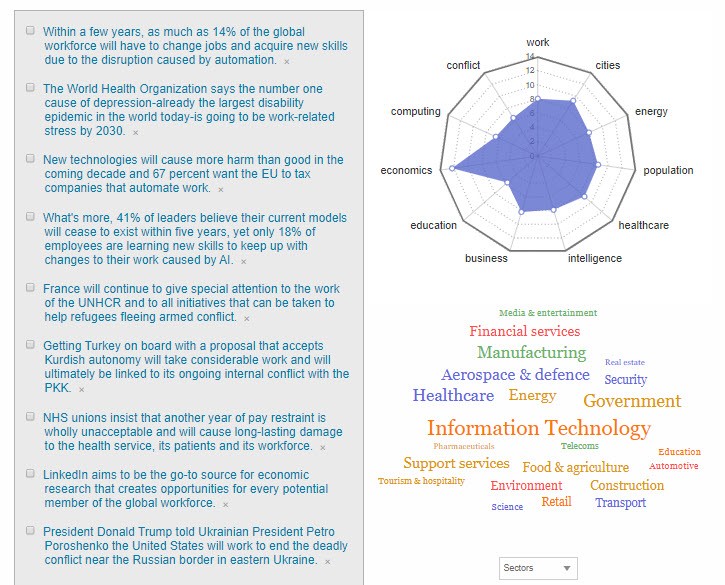 Consequences
McKinsey Global Institute projects that if automation adoption is in the midpoint of a range of scenarios, about 15% of the global workforce, or 400 million workers, will be displaced by 2030. The World Health Organization says the number one cause of depression-already the largest disability epidemic in the world today-is going to be work-related stress by 2030. Millennials are critical to the new digital business and by 2025 will make up 65% of the global workforce. 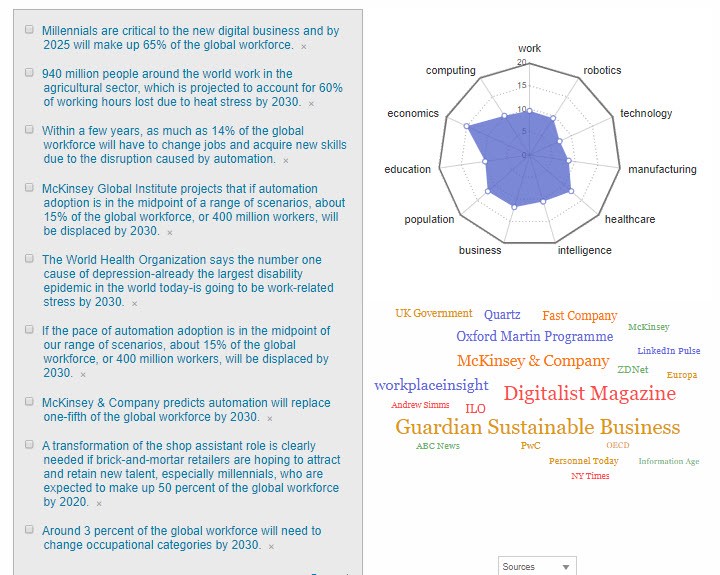 Cloud
All sectors will see dramatic changes in the make-up and size of their workforces in the coming decades.

System map
Automation is going to affect everyone, everywhere, all the time from eyes in the sky security, to smart cities, and assistive robots. 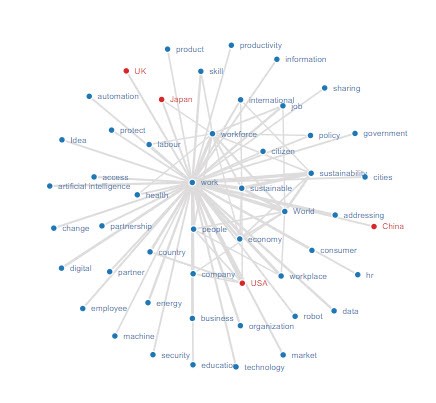 Radar chart
The most affected sectors in 2025 will likely be financial services as machines replace many accounting roles, retail where shop assistants will likely be replaced with smart phones and online payment applications and construction where robots will replace many roles.
On the other hand, jobs are likely to be plentiful in renewable energy sectors and IT. 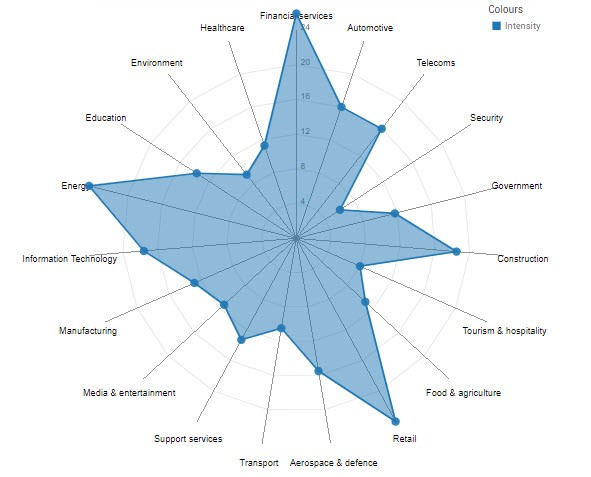 Graph-It
By 2025, the three sectors that are likely to experience the biggest workforce transformations are likely to be healthcare, energy and government payrolls.

Trend Waves
The trend wave story of four years ago suggested transformation would occur in the 2030’s. Bit, the wave since then has come closer to shore and suggests that much more short-term change between 2020 and 2025 is likely. It could roll further forward if a recession occurred next year that forced organizations to cut their costs faster than now planned. 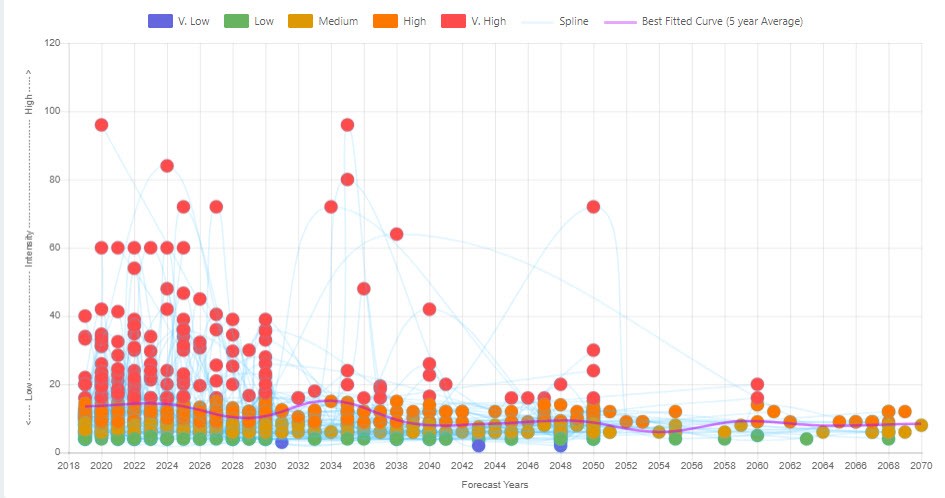 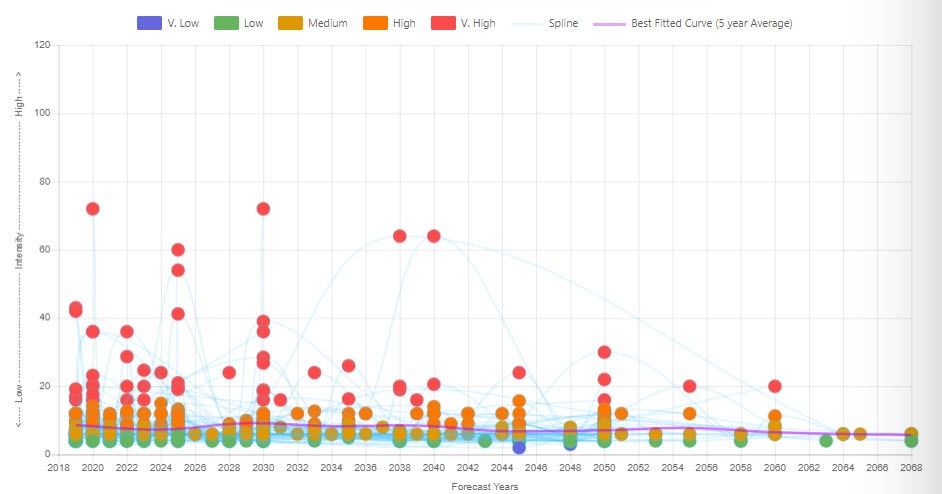 Sentiment
Compared to other sentiment analyses we have written about there is a relatively paucity of scan hits in the chart below suggesting that the implications of dramatic workforce changes are out of sight and out of mind for most experts and pundits.
However, the chart is skewed to a more positive outlook on the future of work than fears of the unknown being relatively subdued right now. Most experts and pundits expect that more jobs will be created than lost in this transformed world, but our view is that there will be gut-wrenching change for many, especially in countries ill-prepared for the wave.

Pie Charts
The Pie Charts below reflect the late arrival of this expected tsunami with 2040 being the robot’s estimate of when the public will likely accept the new work paradigm though continuous business model change and practices will likely continue throughout the rest of the century. There will likely be a need for UBI (Universal Basic Income) or similar structures to be in place for those who are not working in this millennium.

The economic benefit is measured in billions and while most of this change is early stage or gaining traction the changes are much more likely than not, to occur as we see them now (future recession(s) excepted).

Geography
Most worlplace change is concetrated in Asia and North America where the race to automate, particularly with AI is very strong.

Heat map
That’s also reflected in the Heat Map below with Construction, Energy, Fintech, IT and Manufacturing being key areas of focus. 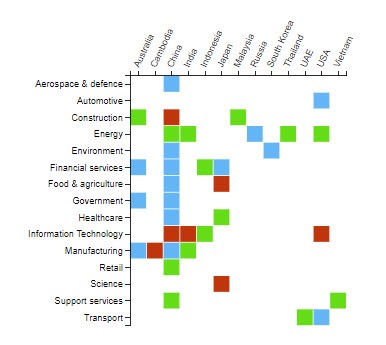 Year on Year
Sectorally, the focus on workforce automation has moved up from a Low level in 2015 to High now. We expect that sectors will increasingly invest in automation to main a competitive position and that in 2020 almost all sectors will be at a Very High level of action. 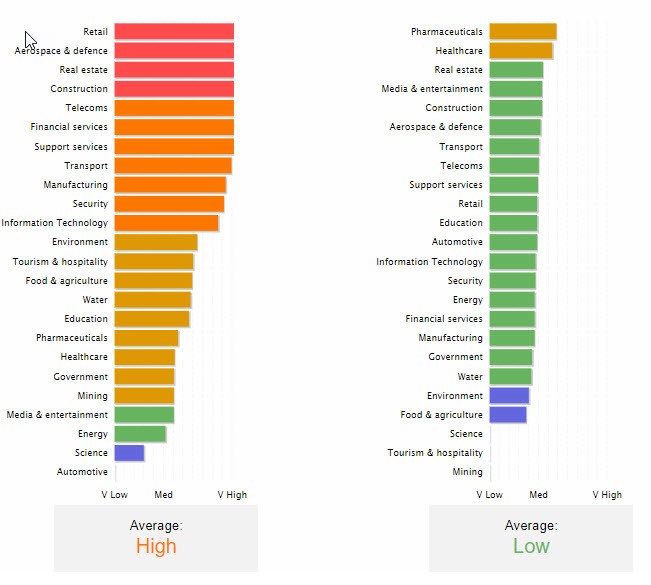 Occupations
Occupations currently most at risk of change in the next decade are shown below. But, breakthrough technologies, not yet in the market, might well change relative positionings in short spaces of time. It’s therefore vital for every organization to have a robust forward radar in place and to develop strategies that are both resilient and agile in the face of dramatic change. 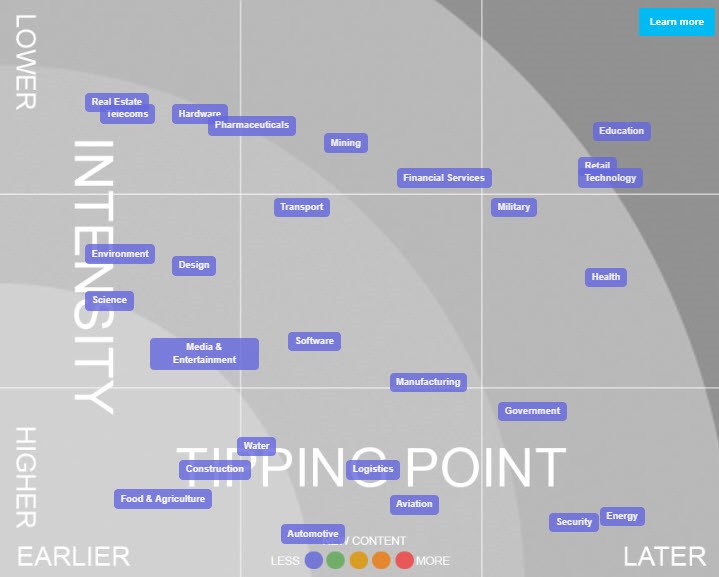 SWOT
The net SWOT chart is extremely positive despite some peoples’ fears. We will likely see the same fears of job losses from the invention of power looms in the 18th century which instead produced an enormous rise in the number of workers required in the cloth industry that persists to this day. The SWOT chart includes many forecasts that there will be many more, as yet unknown jobs for everyone to perform well into the future if they learn to adapt, learn and grow.

Evidence
Search term: “work OR workforce OR workplace. Use this search term to explore our database for more knowledge and wisdom and latest data and information on the topic. 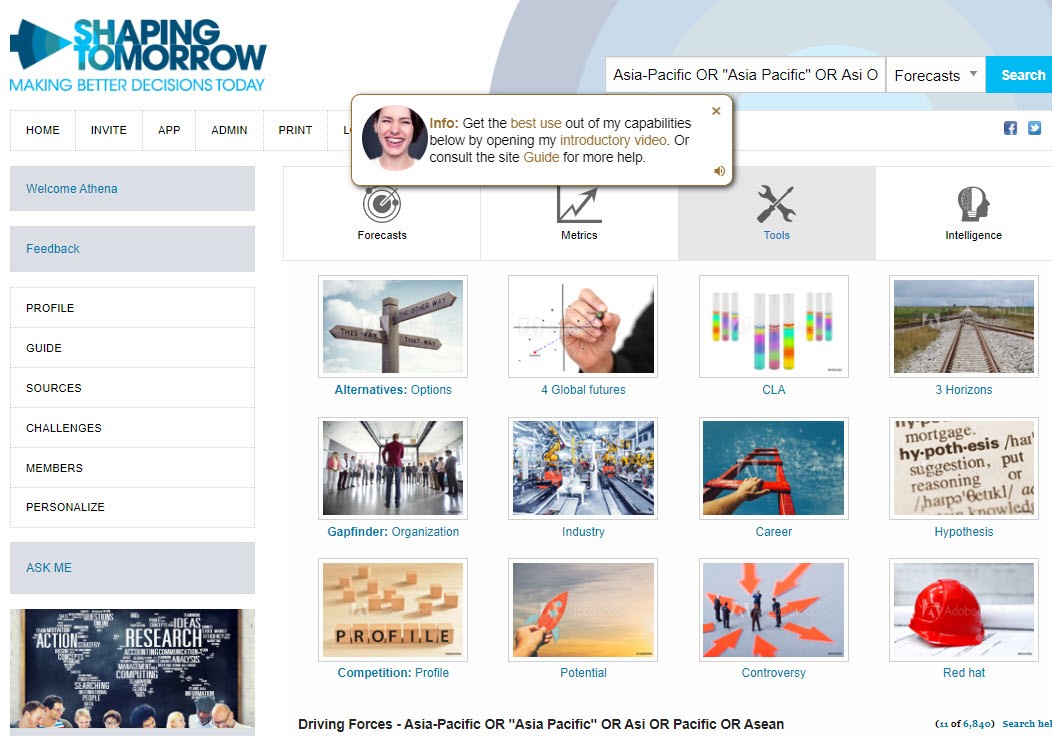 Custom Services
We can produce equivalent reports to this one on any topic for just £1,000 (Plus VAT in Europe). Market rates are usually at least five to ten times this price. Or, you can subscribe to our service and make these yourself at will and use the forecasts in private, collaborative workshops to develop your strategic responses in hours rather than the weeks and months of traditional foresight projects using these methods below:
Options | Gapfinder | Causal Layered Analysis | Scenarios | Three Horizons
Do contact us to see how we can help you track emerging uncertainty issues and developments as they are announced or reported.

Sources
Athena used the sources below as the top ones to create this report and determined which embedded forecasts are included in this Trend Alert. She found 9,961 forecasts in seconds on 5th September 2019 to allow us to publish this report in less than two hours. She can turn these into PowerPoint slides and Audio files in minutes too as you wish, or we can prepare a full customized and professionally written brief for you to order covering all these forecasts. 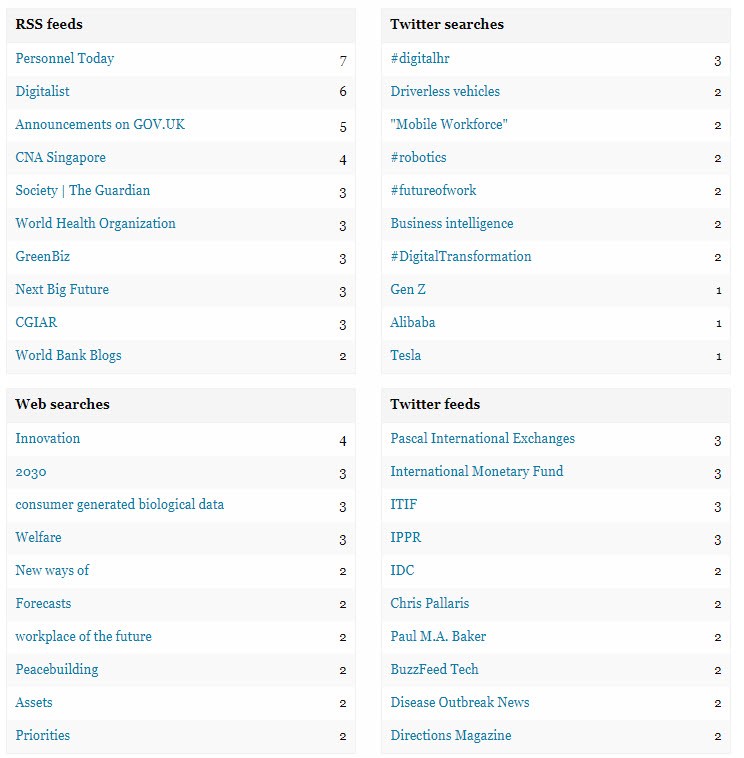 Athena
Athena does show duplicates to aid your understanding of themes as well as contradictory forecasts. She may also show near-duplicates. You can speed read past the duplicates and near-duplicates if you wish, though the latter may show additional information. You can use the contradictory, and likely uncertain forecasts she finds to imagine different scenarios. The future is unpredictable, but we can examine the possibilities and choose our preferable future from the choices she presents.
Athena is apolitical. She will report forecasts from different viewpoints however distasteful that might be to our own values. Wearing rose-colored glasses is not her purpose; reporting potential futures is. So, we recommend you check her veracity before responding to her extracted forecasts.

Just like humans, Athena can be fallible. Do recognize that you and your associates are biased too. But whereas you tire, make mistakes and only recognize what interests you, she does not. She might miss or misinterpret as you do, but with far less frequency and she'll take uncomfortable truths and alternative ideas in her stride. But, please let us know if you feel her bias can be reduced. We want to do our best for you. And, as with any research, you should check and triangulate her findings for yourself.

Keep up to date
You can stay bang up to date on this topic or choose from our many automatic reports to determine what’s next in seconds at www.shapingtomorrow.com
You can also ask us to set-up private topics for you (clients only) to achieve the same thing as this Trend Alert for your associates or set up email subscriptions (Registration required) on your favorite subjects.